In my ten years of taking underwater photos, I’ve been admittedly hesitant to try what is still considered a relatively small niche in underwater photography – fluorescence (or “fluoro”) photography. When I’ve thought about trying it, I would write it off as another reason to buy more expensive gear with a potentially steep learning curve. After giving it my first try with the Olympus TG-6 and the Ikelite fluorescence kit, I am now regretting not getting into fluorescent photography sooner – I’m addicted! 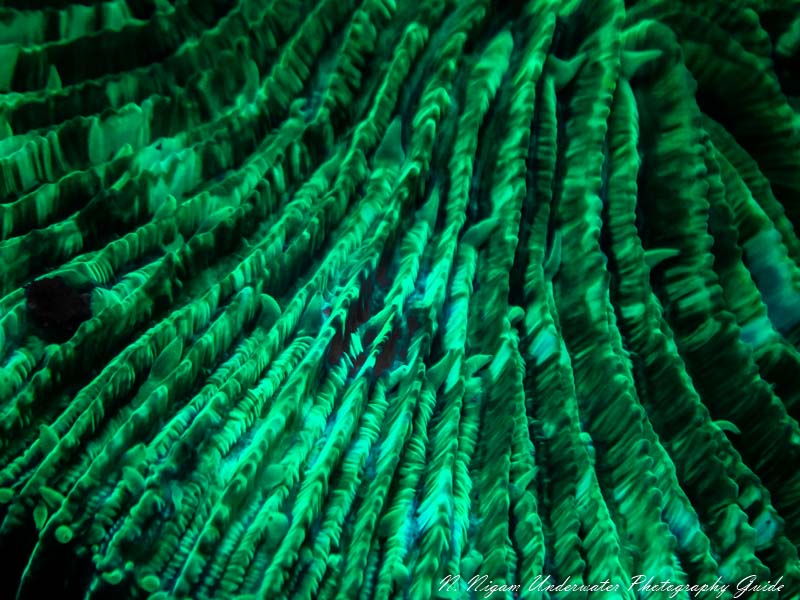 The Olympus TG-5 and TG-6 are popular compact cameras for underwater photography – particularly because of what they can accomplish at a low price point. But the rarely discussed benefit to owning a TG-5 or TG-6 is the multitude of accessories, particularly from Ikelite, Kraken, and Nauticam, that can unlock new realms of photography previously inaccessible to compact shooters. For example, the TG-6 can be paired with the FCON-T02 fisheye lens and an Ikelite dome port to capture a wide field of view from circular fisheye to normal fisheye to 30mm equivalent macro. But my new favorite Olympus TG-6 capability is fluorescence photography which can be unlocked with the Ikelite TG-6 fluorescence photography starter package. I took this system on a Bluewater Travel workshop to Anilao, Philippines where I was one of the trip co-leaders. As the underwater macro photography capital of the world, it was the perfect place to put the fluoro setup to the test. Click here to check out our underwater photography workshops at Bluewater Travel! All of these photos were taken during out Anilao photo workshop.

What is underwater fluorescence photography?

One type of hidden magic found in the dark, nighttime depths of our oceans is fluorescence. Fluorescence is when an object releases light after excitation by another source of light. Fluorescence is different than bioluminescence. Creatures that are bioluminescent will emit light independent of another source. Rather than producing their own light, creatures that fluoresce emit light at a lower wavelength than what is irradiated upon them. For example, if you shine a blue light or UV light on some corals, they will shine green in return. However, without the blue light, these corals will not emit any light.

In order to capture this phenomenon on the sensor of a camera two items are needed:

1. A blue or UV light – blue is preferable

2. A yellow filter to go over the lens of your camera

The Ikelite TG5/TG-6 fluoro kit is perhaps the easiest-to-use fluorescence photography kit on the market. It includes an Ikelite TG-6 housing, Ikelite DS 161 strobe (with a modeling light for finding fluorescent subjects), an excitation filter for your strobe, and a yellow filter for your port. The filters themselves are relatively inexpensive. If you already have the camera system, the filters are only an additional $225 to access the magic of fluorescence!

Because the TG-6 has no manual mode, it’s a great option for divers who don’t want to deal with settings while taking fluorescence photography. Of course, your best results are always going to be with a fully manual camera, but if you’re looking for point-and-shoot fluorescence, this is the system! The Ikelite excitation filter and yellow filters are sold separately, so you can always use them on a higher end camera system. In fact, a camera with high ISO capability is preferred for fluorescent photography. 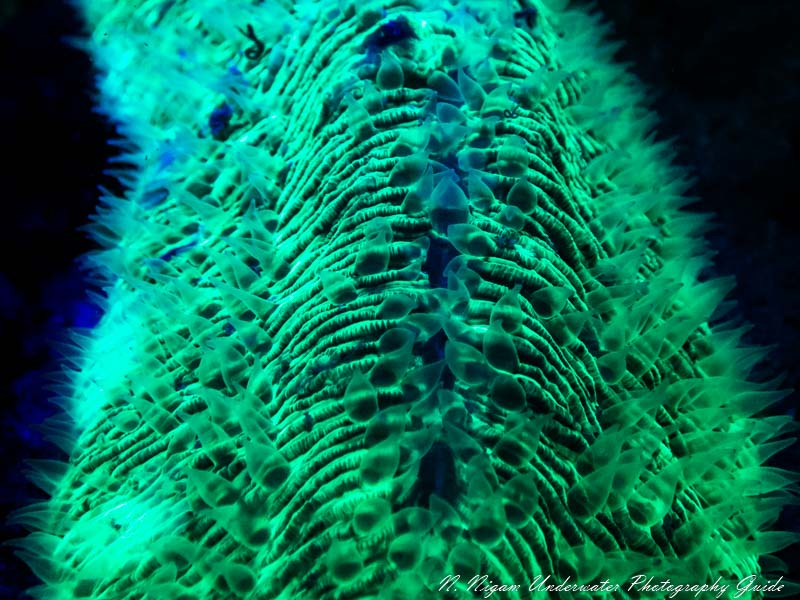 As I mentioned before, the learning curve with the TG-6 is pretty small, even for fluoro photography. All I did was put the excitation filter on my strobe, put the yellow filter on my port and looked for anything that would glow under the blue light of my Kraken 5000S+. I also used the modeling light from my DS-161 to find subjects. After I found a subject, I positioned my strobe like I was taking a photo in the day time, and fired. With some subjects the light from the strobe is enough to produce bright fluorescence. With others I had to play with strobe positioning and post processing if the light wasn’t enough. Since you let the TG-5 or TG-6 choose your settings for you, success rates can be a little inconsistence. I found program mode to work best for this kind of photography. I used microscope mode for some of the close up macro shots. If you find something that fluoresces really well and you have a strong, continuous blue light, you can even take some fluoro video! You can also use your strobe for creative lighting effects like backlighting. 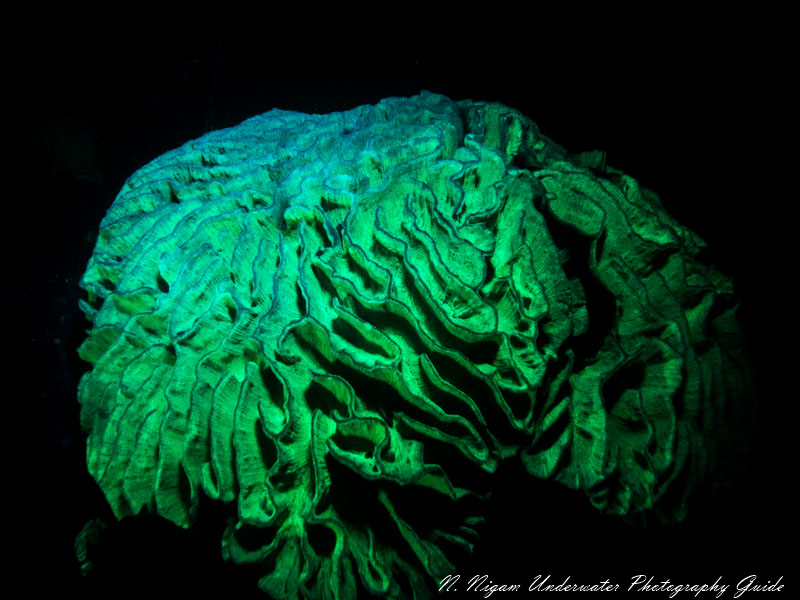 I had the best luck on rubble-y reefs with lots of hard coral. Hard corals tend to light up bright green, but some animals can be surprisingly fluorescent. I’ve heard moray eels can fluoresce yellow and lizardfish can light up green. But since I couldn’t find any on my night dives, I stuck to corals and anemones. I did find some red colors on corals and some yellow crinoids. Yellows and reds are harder to bring out as they tend to radiate at a lesser intensity. Sometimes I added a blue fill light to get them to shine a little better. It can be worth hovering over the reef and shining it with a blue light. In the dead of night, there’s a meditative aura that sweeps over you with the green light of the corals. 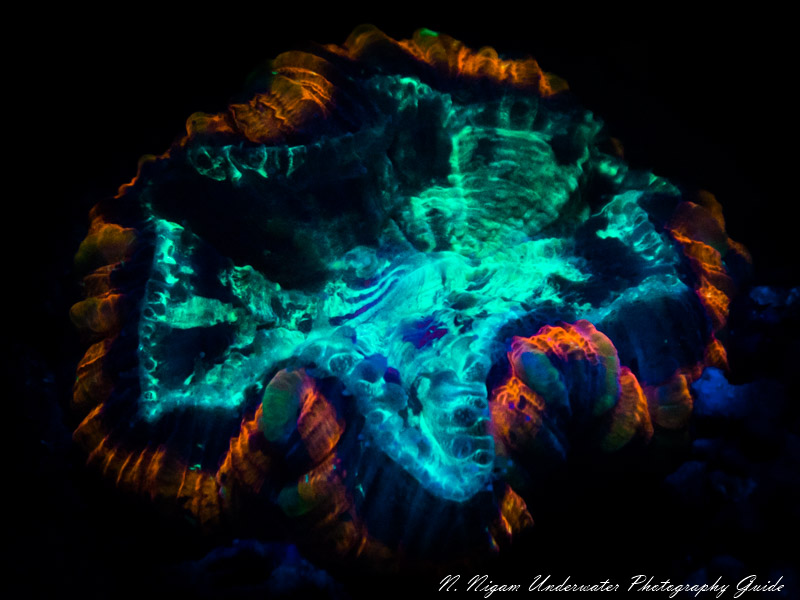 If you’re interested in capturing the rarely explored fluorescent realm of the underwater world, the Ikelite TG-5/TG-6 fluorescent kit is the best place to start. It’s relatively inexpensive, easy to use, and produces beautiful results. I couldn’t have been happier with the shots I captured from the system. In fact, some of these shots made it into the portfolio I created from the workshop – along side photos from high-end systems like the Nikon Z6 and Sony A7R IV.

Diving amongst the beautiful, neon highlights of the reef is an almost religious experience that sends you through a portal into another world on another planet. Capturing the phenomenon on a camera doesn’t necessarily do it justice, but it certainly reveals beauty in unexpected places. 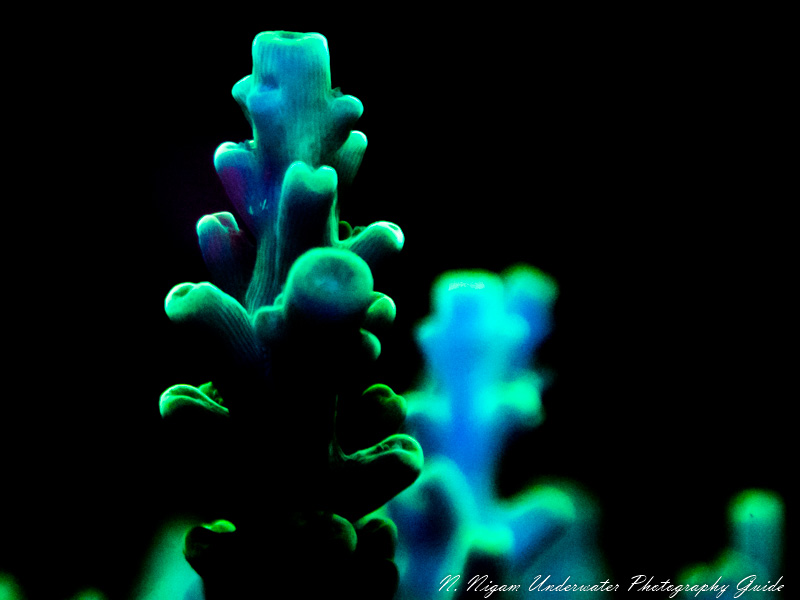 Learn Photography and Save Big at Bluewater

Bluewater offers live online classes for underwater photographers as well as HUGE SAVINGS on select gear -  up to 42% OFF!

Take an Online Class at BluewaterU