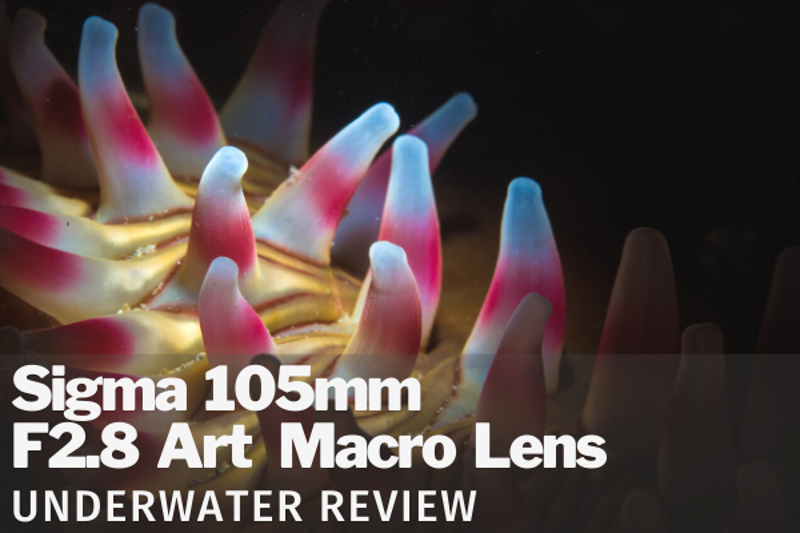 Sigma is renowned for producing high-quality affordable glass, and they have outdone themselves with the Sigma 105mm f/2.8 DG DN Art macro lens. In fact, this recent release is a very viable, affordable alternative to the Sony 90mm f/2.8 macro lens. Beyond the solid weatherproof construction featuring 17 lens elements, the Sigma 105mm macro produces beautiful bokeh and sharp details rivaling any professional 1:1 macro lens on the market. But why is this lens so exciting? Well, the 105mm macro is designed for Sony, Panasonic, Sigma, and Leica shooters. So it becomes a particularly desirable lens for Sony and Panasonic underwater shooters who have, until now, been saddled with slightly lackluster options and high price points. In between winter storms on the Pacific Coast, we took the Sigma 105mm Art macro lens diving in some of the most rugged locales we know with some of the best macro subjects. After our adventures, there's no doubt in our minds, the Sigma 105mm Art is going to be a favorite for photographers and video shooters above and below the ocean's surface. 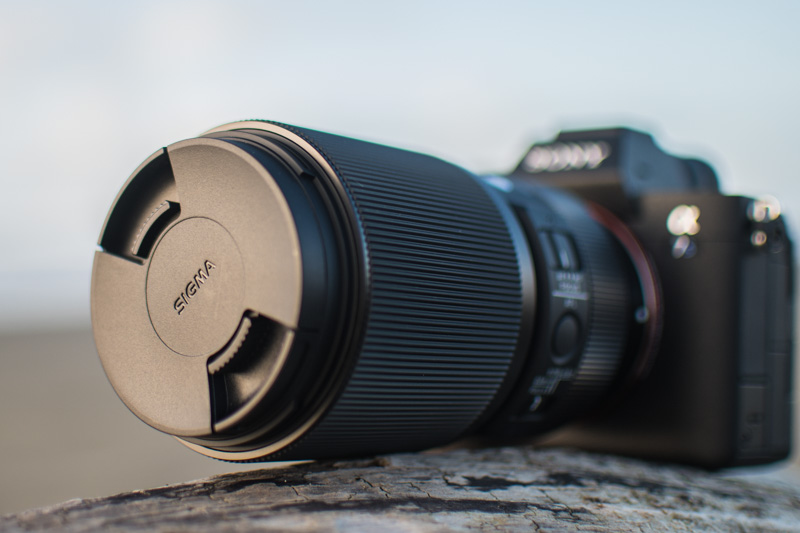 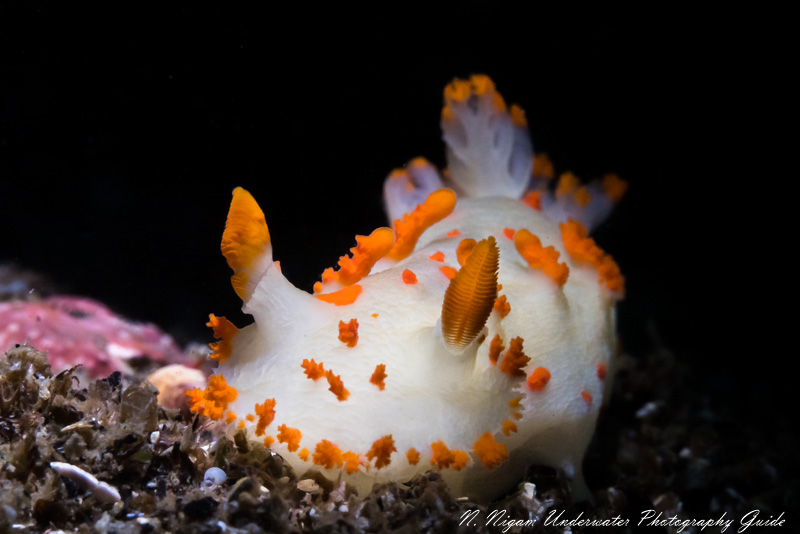 The Sigma 105mm Art macro is a solid lens. For topside shooters, the rubber focus grip and aperture ring feel nice in the hands and the lens isn't overly bulky. It's very easy to hold onto the lens for extra stability without feeling like it's front heavy on the camera. For underwater shooters, the lens is smaller in diameter and less bulky than other 105mm's like the Nikon 105mm. This makes it easy to put the lens through port openings. With most housing manufacturers, you likely won't need to remove the port and lens off the camera before taking the camera out of the housing. You should be able to directly remove the camera from the housing with the lens on. 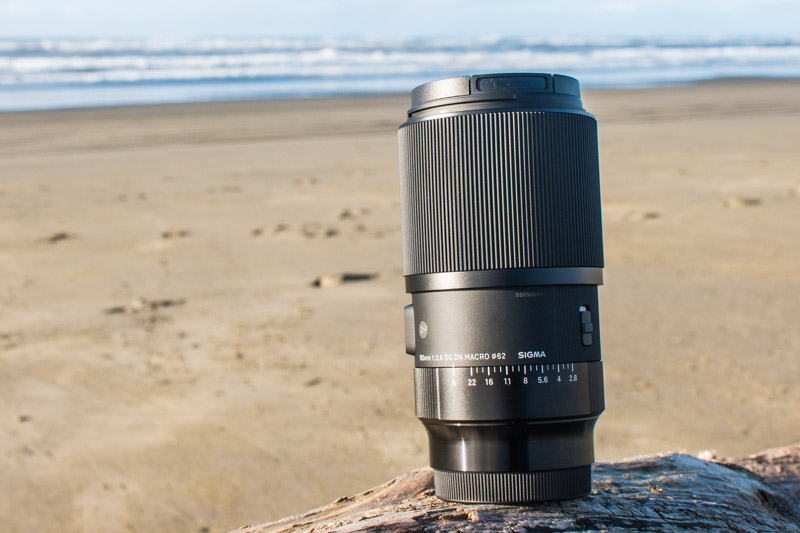 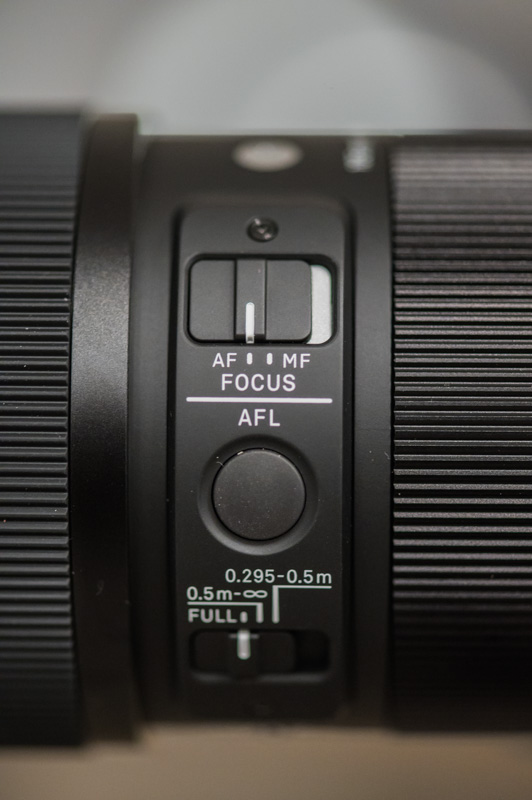 When it comes to durability, kept the lens pretty safe in an underwater housing but our dive conditions were intense and the housing sustained many bumps along the way. We also accidentally got a little bit of water on the lens when we were changing ports and lenses, but the lens suffered no damage. So overall, we're confident the Sigma 105mm can hold up to the elements as well as any other macro lenses on the market, if not better.

At the end of the day, the image quality from the Sigma 105mm art macro is truly astounding for the price. We thought it was on par with the Nikon 105mm and Canon 100mm macro and slightly better than the Sony 90mm macro. Although the minimum aperture is only f/22 on the Sigma 105, there wasn't really a point where we felt that we needed more depth of field. This was likely because the parts of the image that were in focus were extremely sharp, edge to edge. The colors from all our subjects were accurate throughout the image.

We were really impressed to see that there was no noticeable chromatic aberration, flare, or ghosting in our images - even with very high contrast photos. It's a tremendous accomplishment for a lens at Sigma's pricepoint. Even with other brands, we tend to get one to 5 photos in a dive that might have some noticeable aberation, but nothing stuck out in our 5 dives with the lens. Each dive was full of high contrast situations that can often bring out imperfections in the lens. 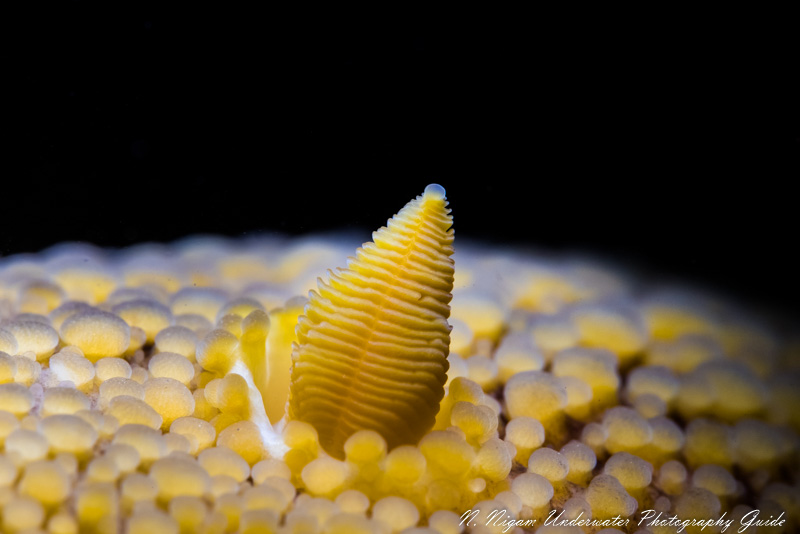 This image is relatively sharp edge to edge, even though it's a super close, supermacro photo. This nudibranch rhinophore was captured with the Sigma 105mm macro, Sony A7S III camera, Ikelite A7S III housing, and Kraken +13 diopter. f/22, 1/160, ISO 100

The bokeh (i.e, quality of the blur beyond the focal plane in your image) produced by the Sigma 105mm macro is just wonderful. It's a little softer and smoother than other macro lenses and has its own subtle flavor. That being said, the bokeh doesn't smudge like we noticed it could do on the Sony 90mm. When it comes to sharpness, the images speak for themselves - this lens is exceptional. Our photos of the session were captured with a new Sony A7S III full-frame mirrorless camera. Despite being only a 12 MP camera, each photo is indisputably sharp and useable. We can't wait to get our hands on a higher resolution camera to use with the lens for amazing 100% crops. It's about the glass, not the camera. We had no noticeable diffraction at f/22 with this lens. And because the aperture doesn't get smaller, we can confidently say that there is no noticeable diffraction with the Sigma 105mm f/2.8 DN DG art macro lens. 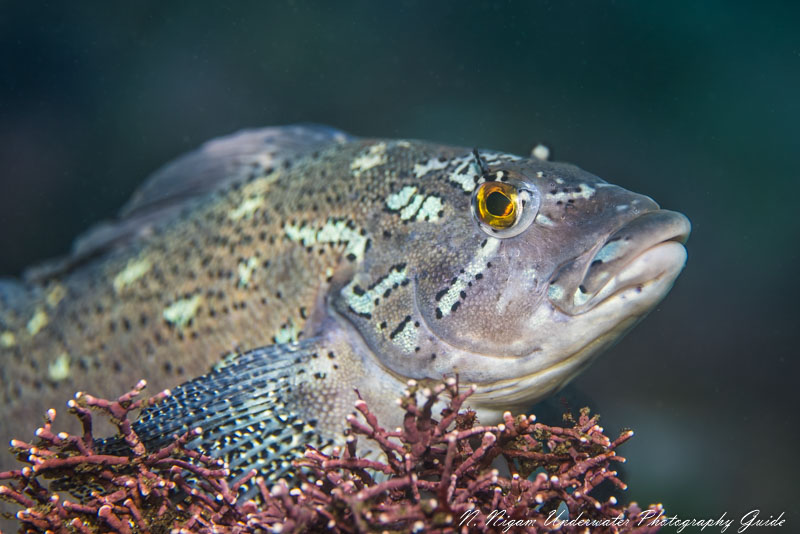 The Sigma 105mm art macro is equipped with a Hyper-Sonic Motor (HSM) autofocus system. The AF system is contained within the lens and there are no lens components that need to externally extend. We went into our tests thinking that the autofocus speed was going to be slower on our Sony camera as it was a third party lens. We were amazed to see that we were wrong. The Sigma 105mm is very, very fast! We had no problem using the A7S III's excellent AF tracking capability with the Sigma 105 to track quick-moving macro subjects like fish. The lens was fast and accurate, and we had a very high success rate. When we tried going from the minimum focusing distance to infinity, we did feel like it was a tad bit slower than the Sony 90mm, but if we shot within generally the same focal distance, it was very quick.

The Sony 90mm macro is admittedly a relatively slow focusing lens. It does take some time to hunt for subjects which can be frustrating. That being said, it really depends on what camera is sitting behind it. Combined with an ultra-fast focusing camera like the Sony A7R IV, we actually find the system to be quicker at focusing and AF tracking than the Nikon Z7 and Nikon 105mm lens. But if the Sony 90mm is combined with a slower APS-C camera like the Sony a6100, it can slow down significantly in autofocus speed. So if you're an avid macro shooter, we recommend checking out Nikon APS-C cameras with Nikon macro lenses or Sony full-frame cameras with Sony macro lenses. 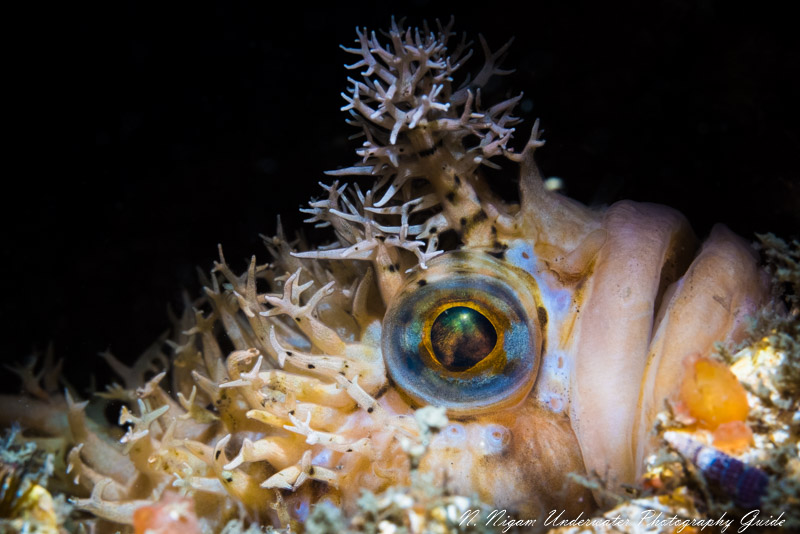 Perhaps one of the only downsides to the lens is the noticeable focus breathing. For photo shooters, this isn't a huge problem. However, video shooters will want to shoot macro video with manual focus or with the AF locked. Otherwise, you can see the frame crop in and out slightly as the lens focuses.

While we were underwater, we did a quick depth of field test with an anemone so you can see how the bokeh looks on these anemone tentacles at different apertures. There's a very smooth transition from f/2.8 to f/22. 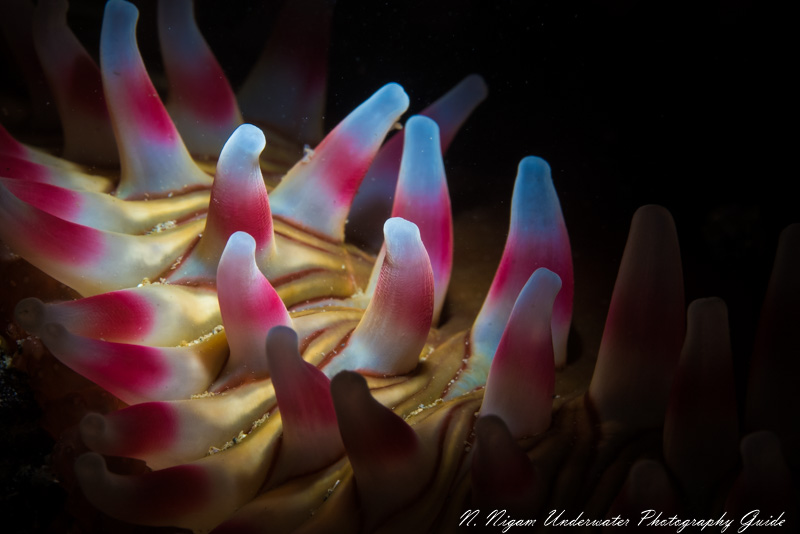 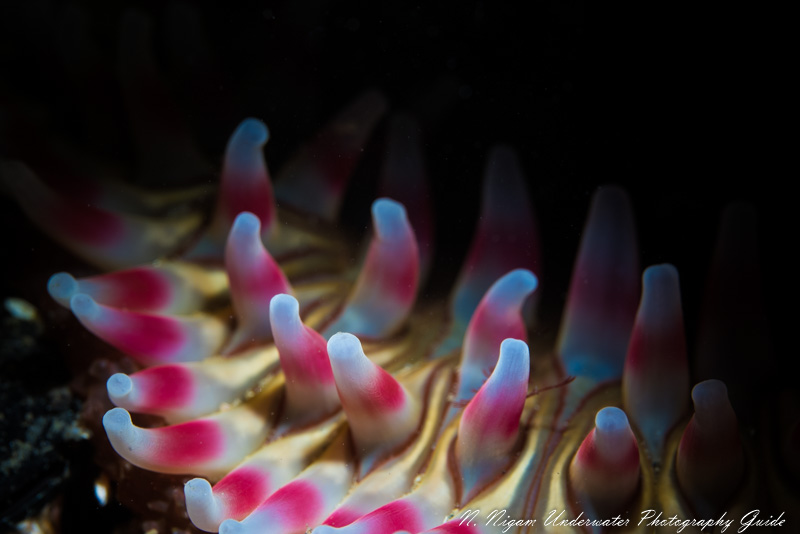 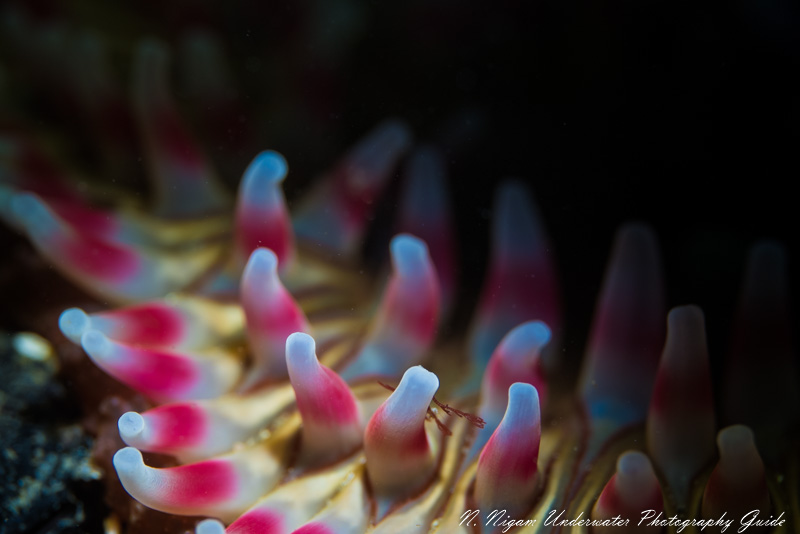 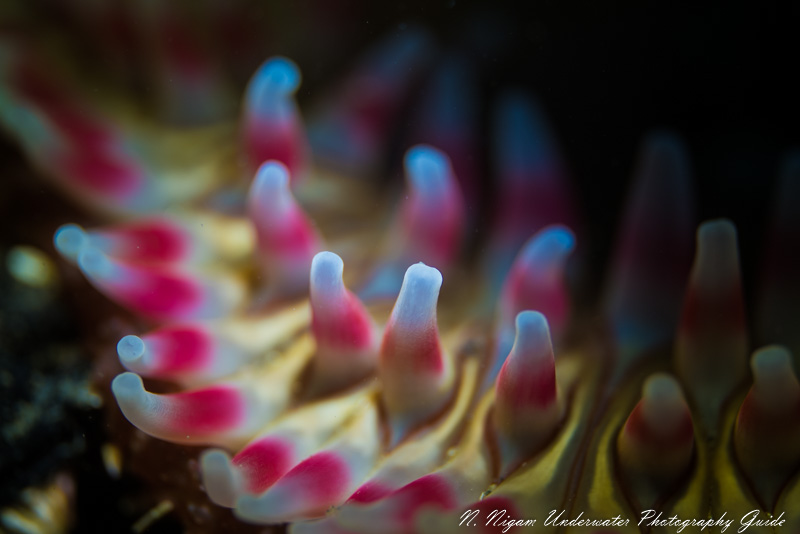 The Sigma 105mm art macro has a nice and long working distance. It's about 15% longer than the Sony 90mm. This makes it great for photographing small, skittish subjects that are normally spooked by a nosy photographer. The Sony 105mm macro is compatible with the Saga magic tube so it can be used for artistic shots of patterns. The lens can be used for subjects orange size or larger, but we don't recommend it as much. It performs best with subjects the size of a marble to a golf ball. 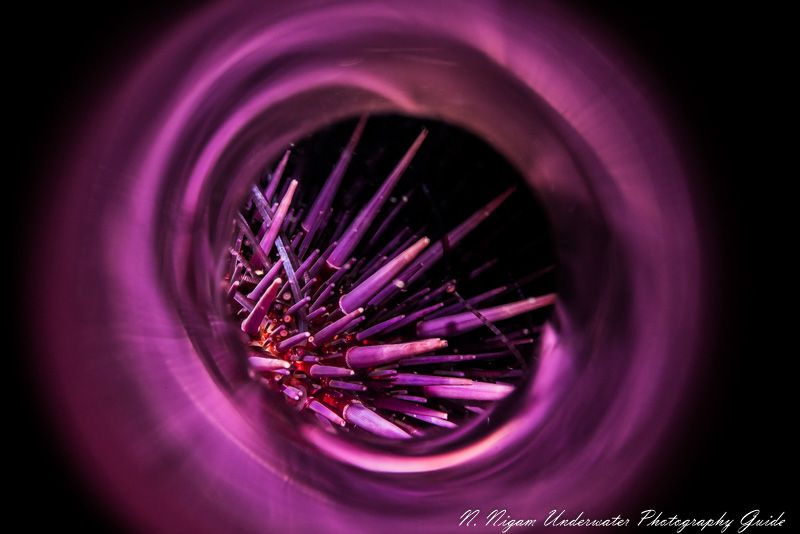 The big question for many Sony shooters is going to be should I shoot the Sony 90mm or the Sigma 105mm art for macro? The Sigma is more affordable than the Sony with slightly better image quality and equivalent AF speeds. So for many photo shooters, the Sigma 105mm is going to be the best option. However, if you shoot in harsh environments and need an optically stabilized lens, the Sony 90mm is optically stabilized and the Sigma is not. Many video shooters will probably prefer the Sony 90mm lens. There is less focus breathing with the 90mm and has a slightly wider field of view with optical stabilization for stable video.

The Sigma 105mm f/2.8 DN DG art macro lens sets a high bar of performance and affordability. The image quality from this lens ranks among the best of any macro lenses on the market. With exceptionally quick autofocus, it's almost as if the only feature lost due to affordability is optical stabilization. But with many new camera models featuring built-in stabilization, this might not be an issue. We think the Sigma 105mm macro is a great option for any photographer who needs the best macro image quality for a Sony, Panasonic, Sigma, or Leica camera. There could be some improvements to focus breathing which would entice more video shooters who might be interested in using autofocus in their video. But overall, we can't overstate how happy we are with this lens. 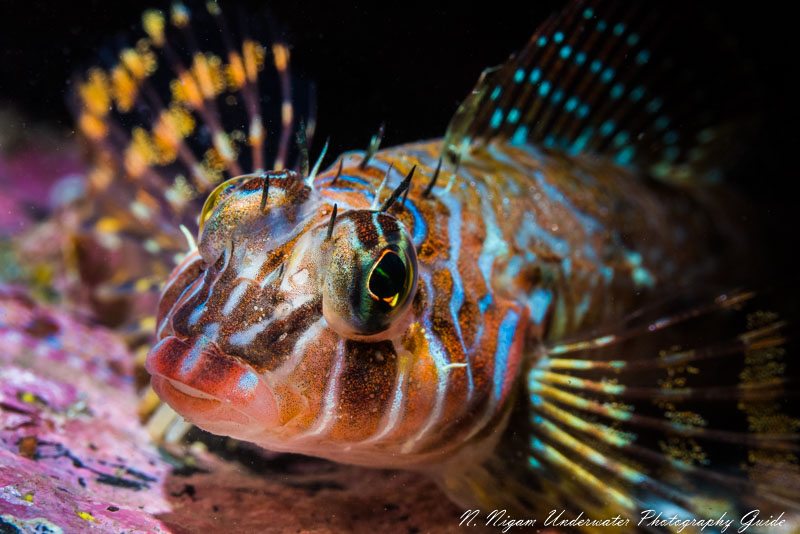 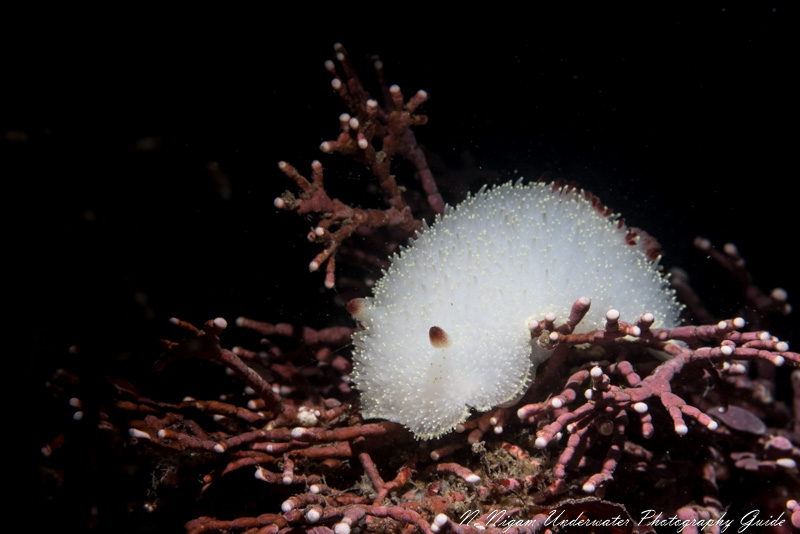