The Mantis Sub Housing for the Insta360 Pro & Pro2 cameras is the first underwater 8K stereoscopic virtual reality system. Bluewater Photo is excited to announce that we are the new US distributor for the New Zealand-based housing company!

A Multifaceted Tool for Any Industry

What's so special about the Mantis Sub? When equipped with the Insta360 Pro2, the system can capture and live stream 360 degree 8K, stereoscopic (3D) virtual reality video footage from up to 20 km away. The applications are endless. So far, the Mantis Sub has been used to livestream 8K, 3D footage straight to land-based VR headsets from remote underwater locations. The housing has also been used to map the internal structure of cave systems in extreme resolution using photogrammetry. This same mapping function has been used to design and develop models for underwater, scuba-diving based virtual reality video games. Whether the Mantis Sub is being used for science, entertainment, military use cases, or monitoring - it's at the cutting edge of VR technology.

At the DEMA 2022 trade show, we had the opportunity to view some 8K stereoscopic Mantis Sub footage through an Oculus VR headset. The footage was jaw dropping. When viewed in VR rather than on a desktop, the footage makes you feel like you are actually diving. The quality of the stereoscopic footage is much more true-to-life than older generations of 3D. Fish and whales and divers swim buy with a touch of reality you can only get if you're there, in the moment. The reason we decided to carry the Mantis Sub in our line up of high quality housings is because of the quality of the results and the extensive potential of its applications. 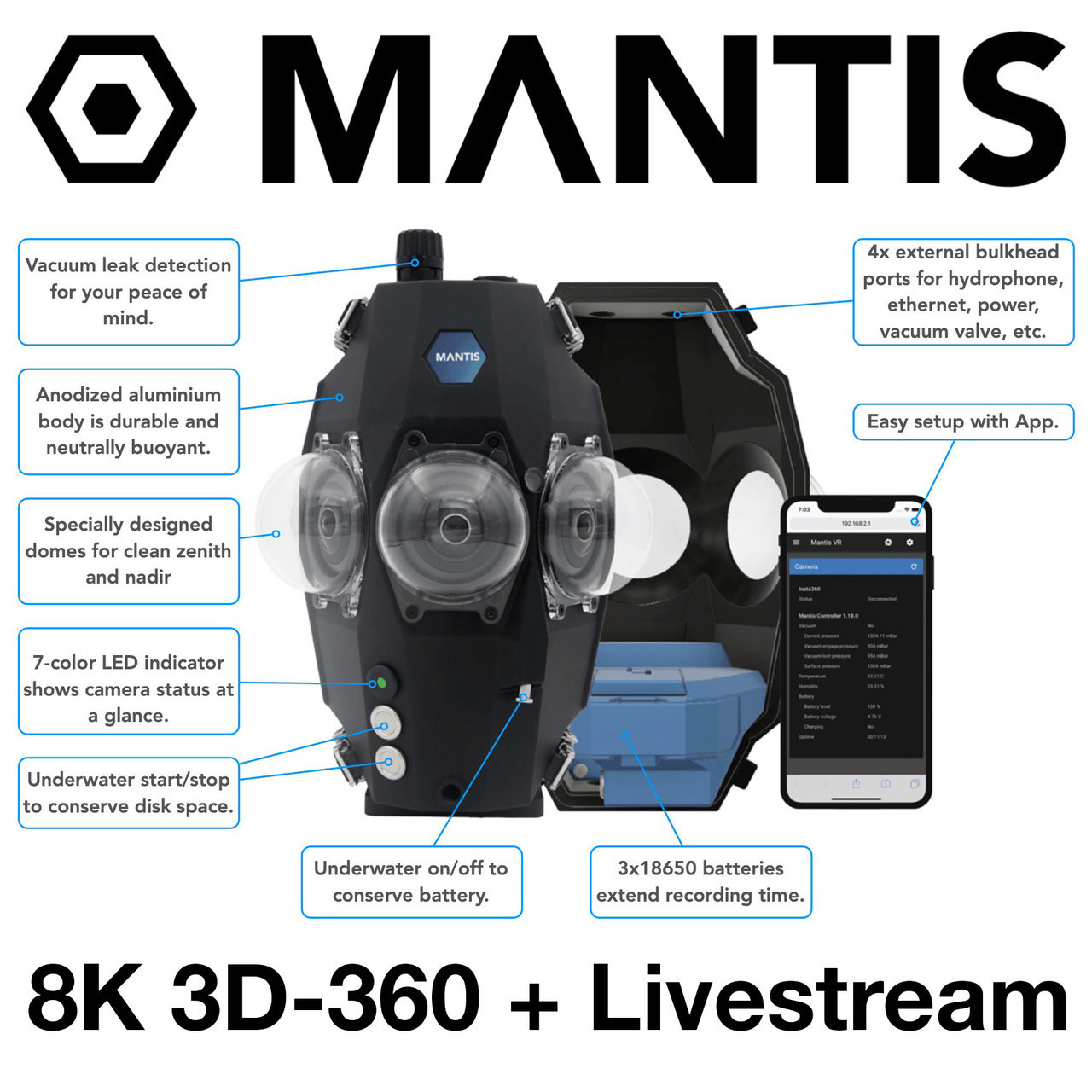 The Mantis Sub Housing has a few key features that are important to mention. Firstly, it has been engineered to be completely neutrally buoyant underwater. This means it is quite effortless to film with. Combined with the stabilization in the Insta360 Pro2, the footage is smooth and easy to watch. The housing has been designed for a clean zenith and nadir so that you do not see your housing in the footage. It has ports for hydrophones, ethernet live-streaming, and mounting points for rigging and lighting.

The camera is controlled with an artisanally designed internal controller that allows you to get a detailed log of the unit's vitals over a phone app. You can also adjust camera settings via the app.

Finally, the housing system is safe to use with a built in vacuum sensor and temperature monitor. Underwater, the system does not overheat. The housing is depth rated to 300ft (90m) and has a run time of 90 minutes of continuous recording (with the option to extend recording times with an external battery). 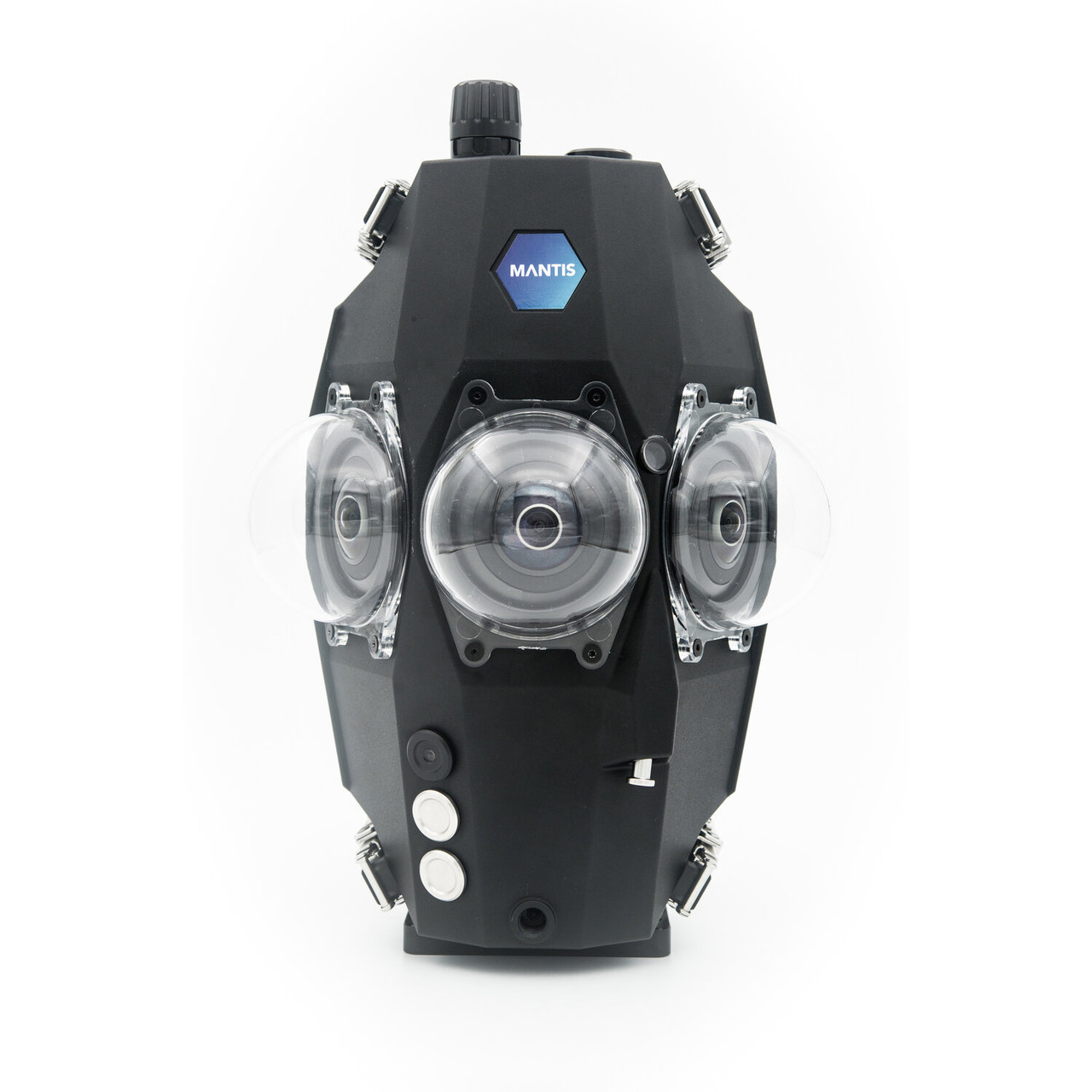 Underwater Lighting with the Mantis Sub

Underwater lighting can be a bit difficult when filming in 360, but certainly not impossible! The trick is to film with small lights, mounted in a soft spiral. Thankfully we sell a lighting system specifically designed for the Mantis Sub. Check out the Mantis Sun 360 Lighting System Here.

While the Mantis Sub has a nice run time of 90 minutes underwater (while recording) and a standby time of 12 hours, for many applications, the user might need a little more time. The power control allows for an external battery canister to be attached to the mantis sub, extending the run time for up to 12 hours.

The Mantis Sub can easily livestream 8K stereoscopic footage to headsets and other recording/monitoring devices. To do this, we recommend an ethernet and power surface-supplied cable.

We are excited to announce that along with ordering a new housing, it is now possible to rent the Mantis Sub form Bluewater Photo! Just drop us a line at sales@bluewaterphotostore.com, and we'll get you set up!